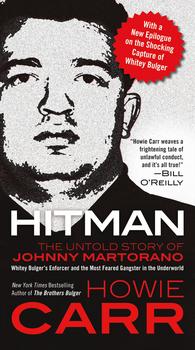 Radio talk show sensation, crime reporter, and Boston Herald columnist, Howie Carr, takes us into the heart of the life of Johnny Martorano. For two decades Martorano struck fear into anyone remotely connected to his world. His partnership with Whitey Bulger and the infamous Winter Hill Gang led to twenty murders for which Johnny would serve only twelve years in prison. Carr also looks at the politicians and FBI agents who aided Johnny and Whitey and at the flamboyant city of Boston, which they so ruthlessly ruled. But most of all, Carr depicts Johnny—a plethora of paradoxes, he was Mr. Mum by day and man-about-town by night. Johnny was charismatically colourful—as charming as he was frightening. After all, he was in the end…a hit man.

Previous Titles
The Brothers Bulger: How They Terrorised and Corrupted Boston for a Quarter of a Century
Author
Howie Carr is a columnist for the "Boston Herald." He wrote "The Brothers Bulger," which spent eleven weeks on the "New York Times "bestseller list, and the "New York Times "bestseller "Hitman." Carr hosts a daily four-hour radio talk show syndicated throughout New England. In 1985, Carr won a National Magazine Award, and in 2008 he was elected to the National Radio Hall of Fame. Carr lives in suburban Boston with his wife and their three daughters.
Selling Points

From the New York Times bestselling author of The Brothers Bulger comes the story of Johnny Martorano.