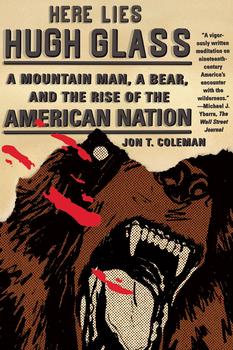 Here Lies Hugh Glass: a Mountain Man, a Bear, and the Rise of the American Nation

In the summer of 1823, a grizzly bear mauled Hugh Glass. The animal ripped the trapper up, carving huge hunks from his body. Glass’s companions slew the bear, but his injuries mocked their first aid. Two men would stay behind to bury the corpse when it finally stopped gurgling; the rest would move on. Alone in Indian country, the caretakers quickly lost their nerve. They fled, taking Glass’s gun, knife, and ammunition with them. But Glass wouldn’t die. He began crawling toward Fort Kiowa, hundreds of miles to the east, and as his speed picked up, so did his ire. The bastards who took his gear and left him to rot were going to pay.

Here Lies Hugh Glass springs from this legend. The acclaimed historian Jon T. Coleman delves into the accounts left by Glass’s contemporaries and the mythologizers who used his story to advance their literary and filmmaking careers. A spectacle of grit in the face of overwhelming odds, Glass sold copy and tickets. But he did much more. Through him, the grievances and frustrations of hired hunters in the early American West bled into the narrative of the nation.

Author
<p>Jon T. Coleman is a professor of American history at the University of Notre Dame. He is the author of "Vicious: Wolves and Men in America," which won the W. Turrentine Jackson Prize and the John H. Dunning Prize.
Selling Points

A marginal player who nonetheless sheds light on the terrifying drama of life on the frontier, Glass endures as a consummate survivor and a complex example of American manhood. "Here Lies Hugh Glass," a vivid, often humorous portrait of a young nation and its growing pains, is a Western history like no other.