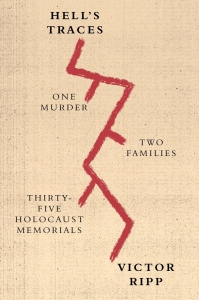 In July 1942, the French police in Paris, acting for the German military government, arrested Victor Ripp’s three-year-old cousin. Two months later, Alexandre was killed in Auschwitz. To try to make sense of this act, Ripp looks at it through the prism of family history. In addition to Alexandre, ten members of Ripp’s family on his father’s side died in the Holocaust. The family on his mother’s side, numbering thirty people, was in Berlin when Hitler came to power. Without exception they escaped the Final Solution.

Hell’s Traces tells the story of the two families’ divergent paths not as distant history but as something experienced directly. To spark the past to life, Ripp visited Holocaust memorials throughout Europe. A memorial in Warsaw that included a boxcar like the ones that carried Jews to Auschwitz made him contemplate the horror of Alexandre’s ride to his death. A memorial in Berlin invoked the anti-Jewish laws of 1930s. This allowed Ripp to better understand how the family there escaped the Nazi trap.

Ripp saw thirty-five memorials in six countries. He encountered the artists who designed the memorials, historians who recalled the events that the memorials honor, and Holocaust survivors with their own stories to tell. Hell’s Traces is structured like a travel book where each destination provides an example of how memorials can recover and also make sense of the past.

An unsentimental meditation on memory and loss that recounts the author’s search for a Holocaust memorial that speaks to the death of his young cousin.