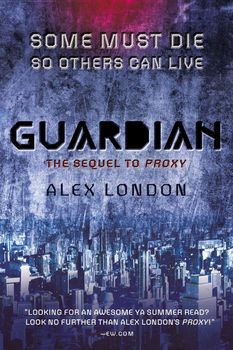 We first see Syd again as an assassination at­tempt is made on his life. In the new world led by the Rebooters, Syd is the figurehead of the Revolution. Liam, an 18-year-old Rebooter, is Syd’s bodyguard and must protect him at all costs. But Machinists with guns aren’t the only danger in the post-Jubilee world. People are falling terribly ill, but since Guardians are hit first, the government does nothing to help. Syd decides it’s up to him to find a cure. . . And what he discovers leaves him stunned: the only way to stop people from getting sick is to reverse the very revolution that he and Knox began.

The adrenaline-fueled sequel to the critically acclaimed Proxy.