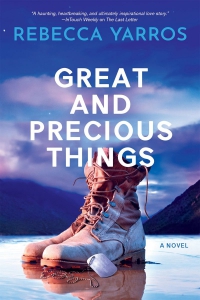 Description
Three brothers went to war. Two came home. Seven years after burying his little brother, Sullivan, Camden Daniels returns to Alba, Colorado, and the father who still blames him for Sullivan's death on the days he can remember who Camden is. On the days he can't, the town remembers plenty, and even a decade of military service can't erase the reputation Camden earned in Alba. Willow Bradley grew up tagging along with the Daniels boys, until she lost her heart to the wrong one. When Camden returns unexpectedly, her carefully buried feelings reawaken in the heart their town believes should still belong to Sullivan. But early-onset Alzheimer's is robbing Camden's father of time, and Cam finds himself fighting another war, this time against his other living brother. As Camden struggles to battle for his father's wishes, the town takes sides, challenging family loyalties and the past they thought they knew. And giving in to his feelings for Willow could destroy what little support Cam has in town and cost his father what choices he has left. Great and Precious Things is about free will, from the labels we're given in our youth, to the power we claim in defining ourselves, and how far we're willing to go on behalf of those who lose it.
Selling Points
Fresh off the success of Yarros’s The Last Letter, this is a gripping and heart-wrenching stand-alone novel that explores issues of family, humanity, and faith.
« Back