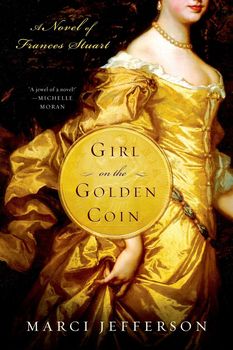 Girl on the Golden Coin: A Novel of Frances Stuart

In 1660, the Restoration of Stuart Monarchy in England returns Frances Stuart and her family to favor. Frances discards threadbare gowns and goes to gilded Fontainebleau Palace, where she soon catches the Sun King’s eye. But Frances is no ordinary court beauty—she has Stuart secrets to keep and her family to protect. King Louis XIV turns vengeful when she rejects his offer to become his Official Mistress. He sends her to England with orders to seduce King Charles II and help him form an alliance with England. The Queen Mother likewise orders Frances to become her son's mistress, in the interest of luring him away from the Protestant mistress he currently keeps. Armed in pearls and silks, Frances maneuvers the political turbulence of Whitehall Palace, but still can’t afford to stir a scandal, determined to keep her family from shame. Her tactic to inspire King Charles to greatness captivates him, and the two embark on a tenuous relationship. Frances survives the Great Fire, the Great Plague, and the debauchery of the Restoration Court, yet loses her heart to the very king she must control. A startling discovery will leave her with no other choice but to break his heart, while the fate of England hangs in the balance. In the tradition of Philippa Gregory, Marci Jefferson brings to life a captivating woman whose beauty, compassion, and intellect impacted a king and a nation.

Selling Points
A debut historical novel about the beautiful Royalist exile Frances Stuart, who must walk a fine line between pleasing kings and protecting her family's secret