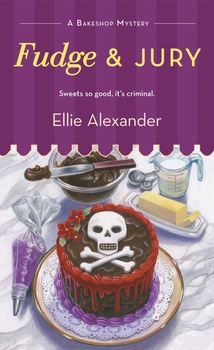 It’s early March in Ashland, Oregon. The town is preparing for the opening of the Oregon Shakespeare Festival’s new season and the annual Chocolate Festival, which will bring with it a bevy of tourists to the small Southern Oregon town. Business is booming at Torte as Jules and her team whip up chocolate confections, like hand-dipped truffles and chocolate crepes filled with mascarpone cheese and drizzled with dark chocolate.

At the festival, everyone raves about Jules’s four-layer decadent chocolate cake. One of other exhibitors is famed chocolatier Evan Rowe of Confections Couture. Evan’s been crowned the “best in show” and the “people’s choice” winner for the last five years, and he’s not pleased that Jules is in the competition. Jules is not one to worry about an egomaniac like him.

But when Evan stops by Torte’s booth to sample a slice of Jules’s four layer chocolate cake he immediately goes into anaphylactic shock from his nut allergy. In a matter of minutes Evan is dead and all eyes are on Jules. What could have happened, and why? Jules knows the answer lies in the ingredients, and she sets out to sift out the truth.