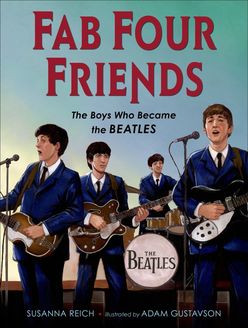 Fab Four Friends: The Boys Who Became the Beatles

In 1957 in Liverpool, England, a young lad named John Lennon and his band played music at a local church fair. In the audience was Paul McCartney, who liked what he heard and soon teamed up with John. Paul’s friend George Harrison kept showing up at rehearsals until the older boys finally let him in. Eventually they found the perfect drummer, Ringo Starr, and the perfect name: The Beatles.

Told through lyrical prose and stunning paintings, this book spotlights four ordinary boys growing up amid the rubble of postwar England who found music to be a powerful, life-saving force.

This is the story of the four fabulous friends who became the best-selling band in history—The Beatles.