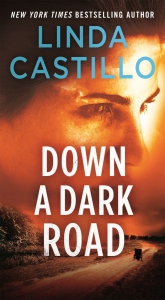 Down a Dark Road: A Kate Burkholder Novel

Description
Two years ago, “fallen” Amish man Joseph King was convicted of murdering his wife and sentenced to life in prison.Now King has escaped from prison. . .and is headed for Painters Mill. For Chief of Police Kate Burkholder, this case is personal. As a thirteen-year-old Amish girl, Kate had worshiped the ground King walked on. Still, Kate never could have imagined the nightmare scenario that becomes reality when King shows up to take his five children hostage - armed, desperate, and with nothing left to lose. Fearing for the children’s safety, Kate agrees to meet King face to face. His only request: to help him prove his innocence. Though skeptical, she agrees - only to discover that the facts and the evidence of King’s case don’t align, and that someone may have set him up to take the fall for murder. Someone who wants to keep a terrible secret buried forever… and is willing to kill again.
Previous Titles
AMONG THE WICKED 9781250061577 (Hardback), 9781250130242 (Paperback), HER LAST BREATH 9781250105523, DOWN A DARK ROAD 9781250121288 (Hardback) and GONE MISSING 9781250136480
Selling Points
A convicted murderer is on the run and Chief of Police Kate Burkholder must catch him before he strikes again.
« Back