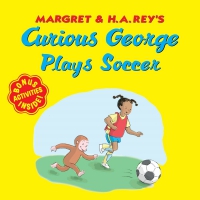 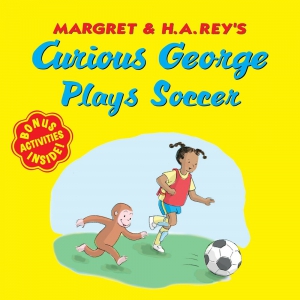 Description
When George sees his friend Gracie playing soccer in the park, he’s eager to join in—so eager that he grabs the ball with his hands and throws it in the net! Lucky for George, there’s a soccer camp starting at the rec centre where he can learn the basic rules of the game and all about dribbling, passing, and what it means to be a team player. George has fun—and gets into a little mischief—at camp, but it’s not until the final game that he finds the perfect position for himself. When he does, he proves to his teammates, coach, and himself that he’s their MVM—Most Valuable Monkey!
Previous Titles
9781328581310 Curious George Makes Pancakes, 9780358157229 Curious George and the Puppies, 9780544652262 It's Ramadan, Curious George, 9780544109889 Curious George and the Pizza Party, 9780544107939 Curious George's 5-Minute Stories, 9780618777112 Curious George Good Night Book
Selling Points
The original Curious George book was written over 75 years ago and George has been delighting readers of all ages ever since!
« Back