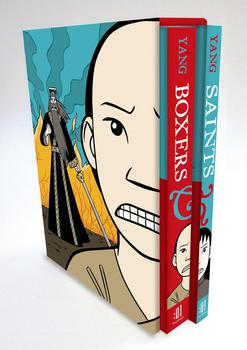 In Saints, Yang lays out the opposite side of the conflict. A girl whose village has no place for her is taken in by Christian missionaries and finds a home with them. As the Boxer Rebellion gains momentum, Vibiana must choose between her country and her faith.

Boxers & Saints offers a penetrating insight into not only one of the most controversial episodes of modern Chinese history, but into the very core of our human nature. Gene Luen Yang is rightly called a master of the comics form, and this book will cement that reputation.
Previous Titles
9781596431522 American Born Chinese, 9781596433595 Boxers, 9781596436893 Saints
Author
Gene Yang was an established figure in the indie comics scene when he published his first book with First Second, American Born Chinese. ABC's instant critical and commercial success, along with its status as a National Book Award finalist and winner of the Printz Award, catapulted Yang into stardom as a brilliant writer for teens and young adults.
Selling Points
Both volumes of the groundbreaking new diptych Boxers & Saints in a gorgeous, slipcased box set.