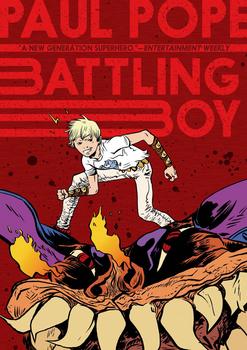 When Battling Boy's father (a warrior god) drops him on a world infested with bloodthirsty monsters, he leaves his son with nothing but a magic credit card, a trunk full of enchanted tee shirts, and instructions not to come home until he's liberated the planet from its plague of monsters.

Its one kid vs an entire world full of monsters. And the monsters don't stand a chance.

The first of two hotly anticipated volumes from comics superstar Paul Pope, Battling Boy is already the subject of much excitement in the comics world and in Hollywood. With heart-thumping action, humour, and spectacular art, Battling Boy is poised to become a true blockbuster

Winner of the 2014 Eisner Award for Best Publication for Teens category.

From comics legend Paul Pope: an action-packed middle-grade adventure that pits the young god Battling Boy against a planet of monsters!