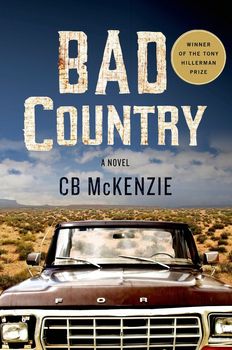 Rodeo Grace Garnet lives alone, save for his old dog, in a remote corner of Arizona known to locals as the Hole. He doesn't get many visitors, but a body found near his home has drawn police attention to his front door. The victim is not one of the many illegal immigrants who risk their lives to cross the border just south of the Hole, but is instead a member of one of the local Indian tribes.

Retired from the rodeo circuit and scraping by on piece-work as a private investigator, Rodeo doesn't have much choice but to say yes when offered an unusual case. An elderly Indian woman has hired him to help discover who murdered her grandson, but she seems strangely uninterested in the results. Her indifference seems heartless, but as Rodeo pursues his case he learns that it's nothing compared to true hatred. And he's about to realize just how far hate can go.

CB McKenzie's Bad Country captures the rough-and-tumble corners of the Southwest in accomplished, confident prose, with a hardnosed plot that will keep readers riveted.

The newest winner of the Tony Hillerman Prize, a debut mystery set in the Southwest starring a former rodeo cowboy turned private investigator, told in a transfixingly original style.