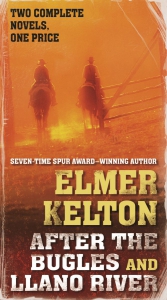 After the Bugles and Llano River

After the Bugles Joshua Buckalew has left behind the deserted battlefields that claimed his brother Thomas. The war with Mexico has cost him much, but it has also given him a strong bond to the land and to the Mexican families who stood with him against the tyrannies of Santa Anna. Josh is travelling with Ramon Hernandez, his best friend and the man who had fought with him. Where they are going, he isn't quite sure. His home is in ashes - burned by either the retreating Texans or the advancing Mexican Army - and the land is full of bandits and opportunists who would happily shoot Ramon simply because he is Mexican. Exiles in the land they had fought to liberate, Josh and Ramon struggle to rebuild their lives after the bugles. Llano River When former cattle man Dundee wanders into the town of Titusville, he's broke, tired, and itching for a fight. Instead, he gets a job offer from none other than the top man in town, John Titus. Titus recruits Dundee to find out who's rustling his extensive herd of cattle. But for Titus, it isn't enough that Dundee find the missing cattle. He wants to place the blame on a specific person: Blue Roan Hardesty, a one-time friend turned sworn enemy of the powerful Titus clan. All Titus needs is hard proof, and Dundee is just the man to get it. What Dundee uncovers creates a shooting war out of a simmering feud...with him in the middle.