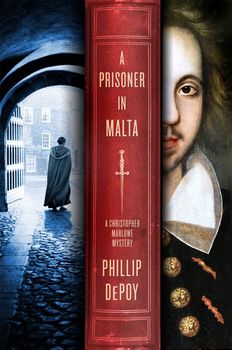 A Prisoner in Malta

In 1583, the nineteen-year-old Christopher Marlowe with a reputation as a brawler, a womanizer, a genius, and a social upstart at Cambridge University is visited by a man representing Marlowe's benefactors. There are rumors of a growing plot against her majesty Queen Elizabeth I, and the Queen's spymaster, Sir Francis Walsingham, has charged young Marlowe with tracking down the truth. The path to that truth seems to run through an enigmatic prisoner held in complete seclusion in a heavily guarded dungeon in Malta. Marlowe must use every bit of his wits, his skills, and his daring to unravel one of the greatest mysteries in history and help uncover and unravel scheme of assassination and invasion, one involving the government of Spain, high ranking English nobles, and even Pope himself.

Christopher Marlowe - Elizabethan playwright, poet, and spy is one of the most enigmatic figures in Renaissance England. The son of a shoemaker from Canterbury, he attended Cambridge University on scholarship and, while frequently in trouble, was bailed out through the intercession of Queen Elizabeth I's Privy Council. Long rumored to have been an agent on behalf of the Queen's spymaster, Edgar Award winner Phillip DePoy's new series brings Marlowe and his times to life.