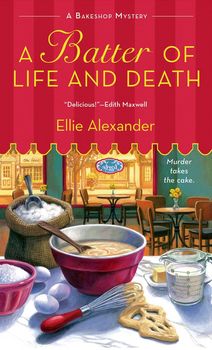 A Batter of Life and Death

Autumn has arrived in Ashland, Oregon—the perfect season for a spiced hot apple cider with a slice (or maybe two) of peach crumble. The Pastry Channel has also landed in the quaint little town to film the "Take the Cake" reality show. Jules Capshaw, now that she's decided to move home and help her mom run Torte, the family bakeshop, wants nothing to do with the competition—until she is unwittingly entered into the competition. The cash prize of $25,000 certainly isn't anything to sneeze at, and Torte could really use the extra dough. So, Jules dusts off her Bavarian Chocolate Cake recipe and cinches up her apron. But just as the competition starts heating up, one of her fellow contests, Chef Marco, is discovered buried in buttercream. Could the portly chef have overdone it, or is there something more sinister cooking?

A reality cooking show comes to Ashland, Oregon, landing Jules Capshaw square in the middle of some stiff competition—and murder