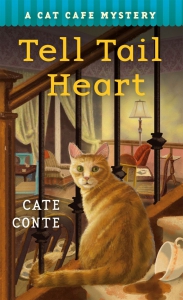 Description
Maddie James is hoping to have some downtime during Daybreak Island’s off-season to tackle her to-do list. Her grandfather’s house-turned-cat-cafe is under construction and she’s also scoping out places to open a juice bar on the island. On top of that, her relationship with adorable dog groomer Lucas has taken a positive turn. But downtime is hard to come by on Daybreak these days, especially when a big-name writer who’s on the island working on a new project winds up floating in the canal the same day an eccentric woman shows up at the cafe claiming Maddie’s cat, JJ, is hers. As the investigation picks up, it becomes clear that these events could be related, and Maddie realises that even the neighbours she’s known all her life might be keeping secrets . . . .
Previous Titles
Cat About Town 9781250072061
Selling Points
The third in a mystery series filled with felines and crime that's purrrrfect for cat fanciers and mystery solvers alike!
« Back