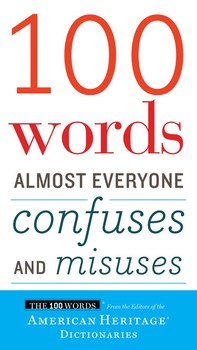 100 Words Almost Everyone Confuses and Misuses

Editors of the American Heritage Dictionaries

100 Words Almost Everyone Confuses and Misuses is the perfect book for anyone seeking clear and sensible guidance on avoiding common pitfalls of the English language.

Each word is fully defined and accompanied by a concise, authoritative usage note based on the renowned usage program of the American Heritage® Dictionaries. Each note discusses why a particular usage has traditionally been criticised and explains the rules and conventions that determine what’s right, what’s wrong, and what falls in between. This edition has updated usage notes that have been re-analysed and rewritten to account for language trends that have occurred since its initial publication in 2004.

Troublesome pairs such as affect / effect, blatant / flagrant, and disinterested / uninterested are disentangled, as are vexing sound alikes such as discrete / discreet and principal / principle. Other notes tackle such classic irritants as hopefully, impact, and aggravate, as well as problematic words like peruse and presently. 100 Words Almost Everyone Confuses and Misuses is guaranteed to help keep writers and speakers on the up-and-up!

Selling Points
Do you know how to use these 100 words?
« Back